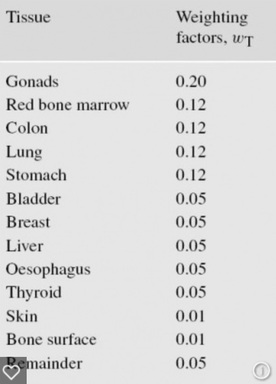 ​​The concept of effective dose is used extensively in assessing the risks of radiation exposure to individuals and populations.

As an example of how the effective dose concept is useful in the case of individuals, let us assume you have a chest x-ray. The x-rays will expose many organs in your body to varying doses: skin, lungs, heart, bone, bone marrow, etc. Furthermore, these exposed organs in your body will have different sensitivities for developing cancer from those x-ray doses (for example, the same radiation dose delivered to your arm as opposed to your bone marrow would be far less likely to produce a radiation-induced cancer).

Finally, the type of radiation is differentiated in the effective dose calculation by the quality-factor. X-rays and gamma-rays are defined as having a quality factor of one. Other radiations, such as neutrons or alpha particles have quality-factors higher than one, reflecting the greater amount of biological damage they produce for the same dose.

The beauty of the effective dose approach is that no matter how a particular radiation exposes a person, i.e., from which direction, and with what beam width and shape, etc., the effective dose calculation takes all of these variables into account. The total effective dose can then be plugged into an effective dose vs. cancer risk model (such as the commonly used LNT model) to yield the final probability that an individual will develop a radiation-induced cancer from a diagnostic exam.

For the chest x-ray we postulated in this example, the total effective dose would numerically be approximately 5 times lower than the actual skin dose delivered within the boundaries of the x-ray beam. Correspondingly, the risk for an individual developing cancer from this chest x-ray would theoretically be 5 times lower than if the older fashioned skin dose assessment were employed. The simple skin dose approach was utilized for assessing radiation risks from diagnostic x-ray procedures until about 20 years ago, but proved notoriously inaccurate in predicting cancer risk.

Here is an example of how misunderstood effective dose is by those who really should understand it. The TSA at U.S. airports is in charge of the operation of threat detection devices such as x-ray backscatter body scanners. Following a request by a congressional committee, the TSA released the effective doses delivered to subjects undergoing x-ray backscatter body scans. However, this disclosure was vehemently criticized by certain watchdog groups because, they claimed that the TSA when stating the doses delivered by these devices only gave the effective dose, whereas the actual dose to the subject’s skin was far higher. This is where the misunderstanding arises: yes, the dose to the skin would indeed be far higher numerically than the effective dose, but what was not understood by the watchdog groups--or the congressional committee--was that the higher skin dose was completely accounted for in the calculation of the effective dose, as we demonstrated in the example above of an individual receiving a chest x-ray. The TSA was completely correct in reporting the cancer risk based on the effective dose and not on the skin dose.
CLICK TO RETURN TO radiation questions website